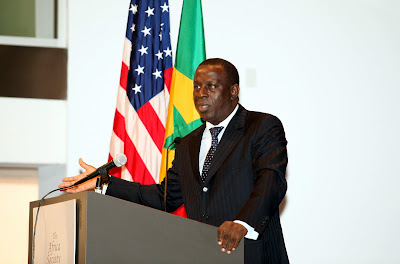 On Friday, September 18 The Africa Society of the National Summit on Africa held the third Ambassador Andrew Young Lecture Series of 2009. Bernadette Paolo, President and CEO of The Africa Society, served as the Mistress of Ceremony while His Excellency Amadou Ba, Ambassador to the U.S. from Senegal provided the welcome remarks. Africa Society Board Member, Timothy Bork, introduced the featured speaker, The Honorable Dr. Cheikh Tidiane Gadio, Minister of Foreign Affairs, the Republic of Senegal. Minister Gadio delivered a dynamic lecture entitled, “A United Africa Becomes a Global Player.” The audience of over 300 diplomats, policymakers, academics, and students listened intently as Minister Gadio spoke with passion about his belief in the power of a United States of Africa. The Minister described Africa as a place of hope and opportunity, noting that while many places worldwide have aging populations, the population of Africa is growing younger. Ambassador Ayalew Mandefro , Africa Society Board Member and former Ambassador to the U.S. from Ethiopia, concluded the program by presenting Minister Gadio with a gift.
The transcript of Minister Gadio
Share Tweet Share