Africa in the News: “

By teachafrica Africa in the News, Politics
No Comments
Committee to Protect Journalists: "‘A Somali journalist’s life is short anyways’" 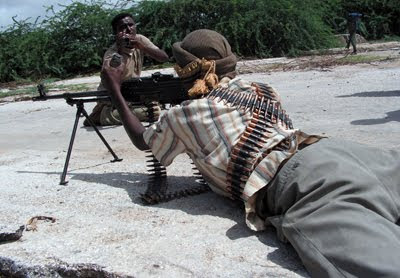 Beyond the current conflict in Somalia between Islamist factions Al-Shabaab and Hizbul Islam and Somalia’s Transitional Federal Government, a violent and repressive struggle between the insurgents, the government and reporters over control of the country’s media has become a humanitarian crisis in itself.

Reporter Tom Rhodes details the challenges of media entities within the country to report the truth, or much of anything at all, without the fear of violent repercussions. However, some journalists and news organizations are fighting back to provide the people of Somalia with up to date and unbiased information.

Rhodes explains that four months ago, BBC operations in the country were forcibly halted, their property stolen and local media contracts cancelled by Al-Shabaab. Hizbul Islam also announced a ban on music to radio stations. These bans were headed by most, as the penalty for defying these “hard-line militant Islamist rebel groups” is often “death by crossfire and assassination.” However, the Shabelle Media Network, described as “one of Somalia’s leading independent broadcasters” broadcast their news and music despite the risks. The Network has paid dearly for their resistance, five of its journalists murdered since the conflict between insurgents and the Transitional Government began in 2006.

The threat of violence on the media seems to be less immediate for the outlets working within the government controlled zones in Mogadishu, however, the fear insurgents hold over outlets and the self-censorship resulting from it are still strong. This is complicated by government threats to suspend radio stations in their controlled areas who comply with insurgent demands. Government authorities also censor information which may be contrary to their interests. Police have detained, interrogated and deleted the work of journalists and cameramen which did not fit the government’s proscribed narrative.

Nevertheless, many journalists throughout Somalia have done no less than risk their lives to report on “one of the world’s worst humanitarian disasters.” Others have continued their cause by reporting outside of the country’s borders.

CNN Video on Journalists and Conflict in Somalia: http://www.cnn.com/video/data/2.0/video/world/2010/07/01/barnett.somalia.journalist.cnn.html

1. What opportunities are being held from the Somali people without media able to report freely?

Who do you think the reporters in Somalia could turn to for help?

What actions do you think the people of Somalia could take to restore media freedom? What actions could the US government/people take?

How much do you rely on the media for information about your community, country, the world? Do you believe these outlets could be biased? Does this make a difference? What could you do to make sure you are getting truthful information?