By teachafrica Africa in the News, Business and Economics, Environment
No Comments 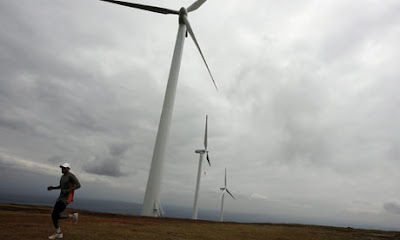 As Africa develops, so does an unprecedented demand for electricity. Many countries have struggled to meet the demand causing blackouts to be increasingly common. There has been substantial debate over Africa’s right, capability and responsibility to develop sustainable power generation over more traditional, less expensive, methods. In this climate of domestic and international pressure, to create more electricity that is both cheap and green, many African countries have turned to the wind.

Kenya, backed by the African Development Bank, has invested £533m in a new project to install 365 wind turbines around Lake Turkana, the largest of its kind on the continent. At their completion (estimated in 2012) the turbines are projected to be able to hold a capacity of 300MW – or “a quarter of Kenya’s current installed power and one of the highest proportions of wind energy to be fed in a national grid anywhere in the world.” However, Kenya’s electricity has been considered very green by any standard as “nearly three-quarters of KenGen’s installed capacity comes from hydropower, and a further 11% from geothermal plants.”

Although Kenya is not alone; many African countries are making strong moves to invest in wind power. Both Ethiopia and Tanzania have begun major plans to construct wind farms which will generate more than 10 and 15 percent of current electrical capacity respectively. South Africa has recently become the first African country to offer a “feed-in tariff for wind power” which incentivizes production by tendering cash for selling power to the national grid.

However, there are considerable obstacles to providing electricity where is has never been available before, whether it is green energy or not. Less than one fifth of Kenyans currently have access to electricity, leaving huge gaps to fill in service delivery, many of these gaps existing in remote, rural, undeveloped areas. The transportation of turbines to their intended sites (as well as necessary improvements to roads and bridges to allow for transportation), the construction of transmission lines and substations, and similar infrastructure development all add huge costs to a green energy solution.

Video on Renewable Energy in West Africa from the Green Actors of West Africa: http://www.youtube.com/watch?v=P7vZlM8ltNY

2. If you lived or ran a business without electricity, would you want access to it as quickly as possible regardless of its source or do you think you would be willing to wait if you knew it would come from a renewable source? Would the price make a difference?