By teachafrica The Africa Society News and Events
No Comments 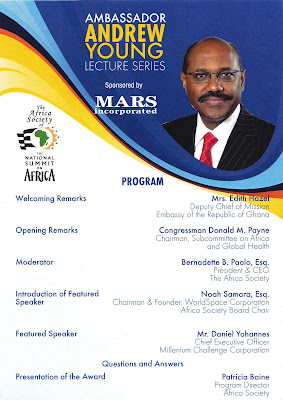 On Wednesday, October 6, 2010 at the Embassy of Ghana, The Africa Society of the National Summit on Africa held the 19th iteration of the Ambassador Andrew Young lecture series entitled “MCC’s Commitment to Africa,” featuring Daniel W. Yohannes, Chief Executive Officer of the Millennium Challenge Corporation (MCC). The speakers emphasized the importance to continue the effort to educate the American public, policy makers, and those in the Africanist community on Africa and U.S. policy towards the continent. Mr. Yohannes focused on President Obama’s policy plan towards Africa and the MCC’s place in fostering peace, security, good governance and development on the continent.

Edith Hazel, the Deputy Chief of Mission at the Embassy of Ghana and host of the event, provided welcoming remarks while Bernadette Paolo, President and CEO of The Africa Society, served as the Mistress of Ceremony. Congressman Donald M. Payne, Chairman of the House Subcommittee on Africa and Global Health, provided remarks on the Africa Society, commenting on the change he has personally seen in the American public and policy makers on their perception of Africa through increased education provided by the organization. Noah Samara, CEO of WorldSpace and Africa Society board member, had the honor of introducing his fellow brother of Ethiopia, Daniel Yohannes.

Mr. Yohannes began his remarks by commenting on the MCC and the Africa Society’s shared goal: “our commitment to helping Africans help themselves replace poverty with prosperity.” He went on to remind the audience of President’s Obama’s message, that Africa’s prosperity is not isolated, but rather tied to the prosperity of the United States. While the United States certainly plays a supporting role in Africa’s development, it is African governments themselves which must be responsible, accountable and “willing to do everything possible to create sustainable environments for growth that will open up opportunities for investment and trade.” Mr. Yohannes explained how the MCC’s performance based grants, which are awarded to countries with firm political, economic, and social policies aims to foster this type of culture in development and investment on the continent. Mr. Yohannes ended with a reminder that “the purpose of foreign assistance must be creating the conditions where it’s no longer needed,” where African trade, commerce and innovation are independent.

The night ended with a rousing question and answer session, which brought to light many of the tough questions the MCC must face. After the lecture was drawn to a close, Mr. Yohannes was given enormous thanks and the audience lingered to enjoy a few more jovial moments among fellow friends of Africa.