Africa in the News: “Could a Split Benefit Sudan?”

The Guardian: Could a Split Benefit Sudan? 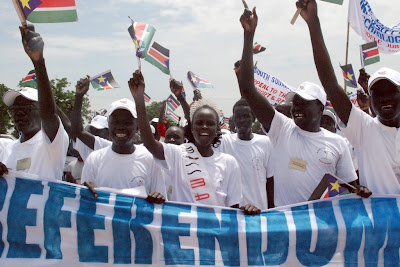 In 2005, a 30 year civil war between forces in the Northern and Southern regions of Sudan concluded with the signing of the Comprehensive Peace Agreement (CPA). This agreement also set forth preliminary terms for a future referendum which would take place in January 2011 and would allow South Sudan the opportunity to become independent if approved. As the date for this referendum has drawn closer, preparations have been made to carry out the vote fairly, transparently and peacefully. Anticipation has risen as it has becomes clearer that the Sudan will likely split into two independent nations. While there are still many contemptuous issues which have yet to be resolved the leadership of both regions have made clear their commitment to hold the referendum on time.

The majority of coverage in the anticipation of the referendum has been full of fear and uncertainty. Secretary of State Hillary Clinton called the countdown to the referendum “a ticking time bomb of enormous consequence.” Southern Sudan’s President Salvia Kiir has requested and been granted UN peacekeeping troops to be deployed across ‘hotspots’ on the border. There has yet to be an agreement on who exactly will be eligible to vote, where the north/south border will be drawn, and how two independent countries would share oil revenues, access to the Nile or other resources. All of these issues have the possibility of sparking economic turmoil or war.

However, a recent opinion article from the UK’s “The Guardian,” has highlighted the potential benefits from a north/south split in Sudan. While attention must be paid to the concerns of holding the referendum and its aftermath, perhaps increased concentration on the potential benefits for both the North and the South is productive as well. The author of the article, Nesrine Malik explains that “we must not conflate the northern government with the people of the north, some of whom, in conversations with me over the past few days, have expressed cautious optimism regarding the separation.”

Indeed there may be benefits for both the people of the northern region which have not been given enough recognition in the midst of so many negative reports. First, the region has long seen the oil rich region to the south as a major source of revenue and invested quite a bit into it. If the north is on its own, it will be forced to turn “its gaze inward” and “compelled to invest in itself and its people, to develop its infrastructure and resurrect a decimated civil society.” Although the northern government may be reluctant to lose a major source of revenue, the people of the north may see an influx of investment in their own communities. This is not to mention the cost savings of peace.

Politically, there may also be a benefit to a split for the people of both sides of the border. Sudan without the South could warrant a significant change in political culture. Perhaps the government may “start to think more carefully about the marginalization of regions such as Darfur and the disgruntled eastern provinces,” for “fear that another rebellion may be on the cards, and to marshal as much revenue as possible from what is left of the country.”

Although there are many legitimate concerns, it is possible that “secession may be the beginning of a real and lasting change.” Of course many challenges lay ahead of both the northern and southern regions of Sudan. The challenges of carrying out the referendum must still be met and efforts to ensure that the procedure set forth in the CPA must be carried out. However, after the referendum, if the South does indeed become independent, both sides will have to confront reality without the other. Perhaps it may be more beneficial to hope for the positive opportunities change can bring than dwell on the negative.

2. Is there anything that the international community could/should do to accentuate the potential positives of a split for the north?

3. Can you think of any other potentially positive consequences of a split for both the northern and southern regions?

A video with background information and a panel discussing the referendum in Sudan from Al Jazeera: http://english.aljazeera.net/programmes/insidestory/2010/09/20109217504924681.html

A video from CNN on the Referendum: http://www.cnn.com/2010/WORLD/africa/09/24/un.obama.sudan/index.html?eref=rss_latest&utm_source=feedburner&utm_medium=feed&utm_campaign=Feed:+rss/cnn_latest+(RSS:+Most+Recent)

Audio from the United States Institute of Peace’s Conference “Sudan’s 2011 Referendum and Beyond”: http://www.usip.org/newsroom/multimedia/audio/audio-sudans-2011-referendum-and-beyond