By teachafrica Africa in the News, Business and Economics, Politics
No Comments 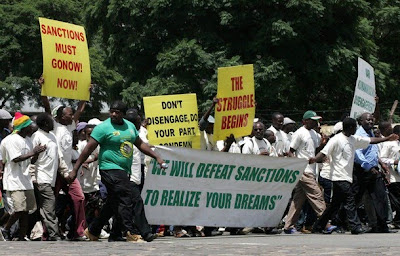 Since 2002, Zimbabwe’s government and economy have been under a cloud of sanctions from European Union (EU) and United States (US) governments. These sanctions were imposed in response to alleged human rights abuses and election fraud by President Robert Mugabe and his regime. Since then, the EU has continuously renewed and increased the number of entities included in the sanctions every year. The United States has passed the Zimbabwe Democracy and Recovery Act which orders directors of financial institutions to “oppose and vote against any extension of any loan, credit or guarantee to the Zimbabwean government or any cancellation or reduction of debt.” While there doesn’t seem to be much public objection to the sanctions in the Europe or the US, officials from Zimbabwe’s neighbors, South Africa and Botswana, have called for their termination.

South African President Jacob Zuma told members of the EU parliament that the sanctions imposed on Zimbabwe had not only hurt South Africa’s economy, but stunted Zimbabwe’s ability to work through its political troubles. The current political arrangement in Zimbabwe is a ‘unity government’ where Robert Mugabe’s Zanu-PF party and Morgan Tsvangirai’s Movement for Democratic Change (MDC) share posts, decision making, and responsibility. Zuma and his staff have explained that it has been difficult for the two parties to become unified when one is limited by sanctions and the other is not. He suggests that for the two parties to reconcile and “for the sake of political progression” the sanctions be suspended or completely lifted. Botswana’s President, Ian Khama, an open critic of Mugabe in the past, also urged EU and US governments to lift the sanctions. He cites the economic hardships Zimbabwe has endured as a result of the sanctions and called them “a hindrance … as the political and economic situation is improving.”

1. Do you think the sanctions only hurt targeted individuals or the general public in Zimbabwe? How might you be able to tell?

2. Do you think it is right to have sanctions on one portion of Zimbabwe’s unity government and not on the other? Do you think this inhibits the two party’s ability to work together?

3. Do you think the sanctions are accomplishing their intended effect?

4. Are sanctions an effective way to bring about change? Can you think of a course of action the international community could take to end human rights abuses and promote democracy in Zimbabwe that would be more effective?

The U.S. Treasury Department’s Website on Sanctions in Zimbabwe:

An Article with Commentary on Lifting the Sanctions from The Guardian:

A Voice of America Video on Robert Mugabe’s leadership In Zimbabwe:

Article and Video from the BBC on Gordon Brown’s Response to Calls on Lifting the Sanctions:

A video from ‘Africa Today’ on Lifting the Sanctions: http://www.youtube.com/watch?v=BL74Q8rwlSs