By teachafrica Africa in the News, Health
No Comments 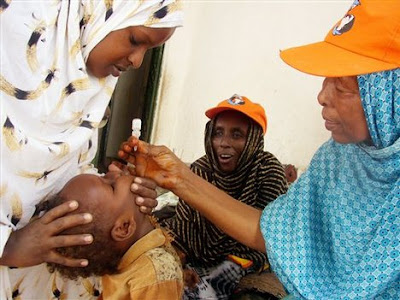 Although the incidences of polio have dramatically increased in Africa, as in the rest of the world, since the discovery of its vaccine in 1952 the eradication of the disease is not complete. In 2009, the disease spread from Nigeria, the only African country to never have stopped polio transmission, across 24 countries highlighting the importance of complete eradication throughout the world. Now 15 African countries are engaging in what is hopefully the final push to rid the continent of the disease.

The disease has no cure, can be fatal, but takes only two drops of an oral vaccine to prevent. The current $43 million UN backed effort will deploy 300,000 health workers in October and November with the goal to vaccinate 72 million children under 5 years old in high risk areas. The health workers will set up both fixed immunization posts and house to house vaccination teams travelling by car, foot, or boat to reach more remote areas. Just last week Nigeria, African’s epicenter of polio transmission, immunized almost 30 million children last week alone. Similar operations are taking place in Sudan, Burkina Faso, the Democratic Republic of the Congo, and Mali among 10 others.

The UN has described the effort of African leaders to combat polio as “unprecedented cooperation and commitment.” The success of this program has shown the importance of cooperation from all actors in humanitarian efforts. Luis G. Sambo, African Regional Director for the UN World Health Organization highlighted that for public health initiatives such as eradicating polio, “essential government support can make the difference between success and failure.” Due to the effort, outbreaks of the disease have slowed tremendously, only Liberia, Mali and Uganda recording new cases and Nigeria reducing the prevalence by 98 percent in the past year. As said by Gianfranco Rotigliano, UNICEF’s Regional Director for West and Central Africa, "political leaders across Africa answered the challenge posed by this dreadful disease and the results are before us.”

1. What do you think are the principle reasons polio has been eradicated in the United States and not in Nigeria? What would change this reality?

2. What lessons could we learn from the successful cooperation of this initiative?

3. Why do you think it might be easier for governments, aid organizations, etc. to carry out this program than other health, development, or educational programs?

A video on polio immunization in Africa: http://www.youtube.com/watch?v=kcG_ud_I89Q

The WHO report of current immunization efforts: http://www.who.int/mediacentre/news/releases/2010/polio_20101026/en/index.html