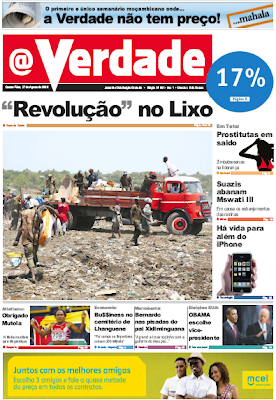 The latest newspaper in Mozambique is printing nearly 10 times as many copies previous papers – and it’s free. The model behind the newspaper is nothing new, like many websites or basic cable, the organization is making money from advertisers, not readers. Erik Charas, the publisher of Verdade (or ‘truth’), says he’s not a newspaper man, but a social entrepreneur who hopes to encourage knowledge and ambition throughout Mozambique with this latest business venture.

Although his readership is primarily low income, Charas says they still have a lot of buying power. He explains that his readers could use the dollar they would have spent on the newspaper and buy a coke or airtime for their cell phones. Companies wishing to advertise such products and services could stand to gain quite a bit from this previously untapped audience. Charas explains the value of a free paper beyond access to information for readers as well – “you don’t have to make a choice feed your brains or feed your stomach, ultimately you have been empowered because your dollar counts.” The advertisers hope the readers will choose to make that dollar count towards their bottom line.

However this newspaper has much more to offer than advertisements and financial empowerment. Beyond the desire to give low-income Mozambicans access to knowledge, Charas explains that his wish is to “build ambition” through his newspaper. He hopes the newspaper will do this by opening “a window to another world” for its readers by exposing them to luxury items like the i-phone or BMWs. The idea is that when people want more out of their own lives they will want more out of their country as well. Through this desire Charas hopes that Mozambicans will demand better government, social services, businesses and jobs.

The effect of the newspaper on the public can already been seen – “in the districts and regions where Verdade is distributed, there was a proven link between reading the newspaper and increased political involvement.” For instance, these regions saw a higher percentage of the population vote, especially women. With these social benefits, not to mention a business model which has been posting profits in one of the poorest countries in the world, it certainly seems to be beneficial for all actors involved.

1. Do you believe developing the media, and its autonomy, in Africa is important to influence more transparent governing? What might be at risk when access to information is not widely available?

Findings and Plan of Action from the Carter Center’s Right of Access to Information in Africa: http://www.cartercenter.org/resources/pdfs/peace/americas/conference2010/african-reg-findings-plan-of-action.pdf