Sudan Tribune: "’Postponement of Abyei Referendum is Undesirable But May Be Unavoidable’ – RVI" 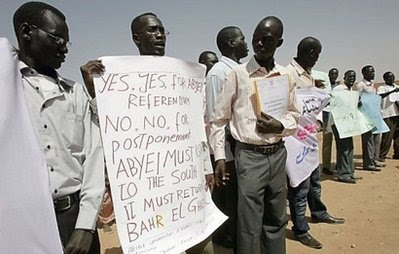 Speculation that Sudan’s January referendum that will decide if the northern and southern regions will split into two autonomous states or remain as one will be delayed in the Abyei border region has continued to mount following a local non-profit report. The Comprehensive Peace Agreement (CPA) which ended Sudan’s civil war 20 years ago and provides guidelines for the referendum requires a separate vote for the people of Abyei to decide if they would be absorbed into the Northern or Southern regions in the event of a split. Although the referendum is expected to be held on time in the rest of Sudan, several key issues have yet to be negotiated for the preparations of the referendum in Abyei to move forward.

Despite the ever nearing date of the referendum, negotiations to resolve outstanding issues over the Abyei region have remained in a stalemate. The most contemptuous issues include “north-south boundary demarcation, the appointment of members of the referendum commission, the question of voter eligibility and residency and issues of public security.” As a result, no necessary procedures for the referendum, such as voter registration, have begun with just over a couple of months before voting day. Even if the disputed subjects were to be agreed upon today, there is little hope that the legal requirements for a vote to take place would be met in time. The report concluded that the “postponement of the Abyei referendum is undesirable but may be unavoidable.” However, the parties have made clear that the rest of Sudan will carry out the vote on January 11.

Several proposals have been made to resolve the disputes and move preparations for the Abeyi vote along even if it does not occur in January. The Sudan People’s Liberation Movement (SPLM) of the south has suggested that they hold the Abyei vote independently of the National Congress Party (NCP) in the north following the initial referendum. However, many have argued that any vote independent of Sudan’s current ruling party would not only violate the CPA but “would be unlikely to gain full international recognition or promote national consensus.” Others have suggested that the Abeyi region be split into two, half going to the north and half going to the south. However, border demarcation and citizenship issues have proven impasses for successful negotiation.

If the referendum may indeed be delayed in Abyei the complications may not be. After the referendum has been completed and the dust has settled, outstanding issues such as citizenship and the sharing oil revenues must still be addressed. The stakes in this region are so high that without successful negotiation unresolved conflicts could trigger another civil war. It is the responsibility of the NCP, SPLM and the international community to ensure that something is applied to deter this harrowing possibility. However, the success of the CPA and preparations for the larger referendum to date should be encouraging for the possibility that there is still time for a ‘political fix.’

1. Do you think Sudan’s referendum in the Northern and Southern regions will carry on without Abyei’s? What would be the consequence?

2. Do you believe the despites over Abyei will be ever be resolved? What could the USA and the international community do to ensure that it is done peacefully?

3. Of the potential solutions listed here, which do you think might be best? Can you think of a solution both the SPLM and the NCP would agree on?

A series of posts on the Abyei referendum from The Enough Project: http://www.enoughproject.org/blogs/abyei-sudan%E2%80%99s-other-referendum-part-i

A video and article on the Abyei referendum from France 24 (in English): http://www.france24.com/en/20101014-officials-rule-out-january-referendum-disputed-abyei-sudan-south-north-politics

A video clip of John Prendergast and George Clooney speaking on Abyei at the Council on Foreign Relations: http://www.youtube.com/watch?v=kD6UoO-QM4k