Africa in the News: “Guineans cast ballots in presidential poll” 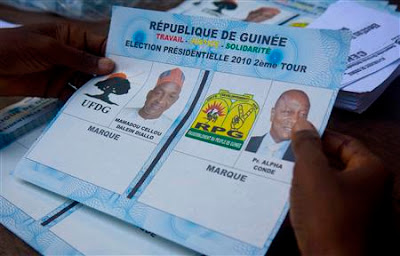 Sunday, November 7, 2011 marks Guinea’s first free and fair presidential elections since the country gained its independence 52 years ago. This is the first election to move the country from military rule to democratic governance and is a major milestone for the region of West Africa. This election follows the primary elections last June in what was called “the nation’s most credible and democratic election ever.” The results of the June poll allowed opposition leader, Alpha Conde, and former prime minister, Cellow Dalein Diallo, to compete in Sunday’s runoff. Reports indicate that the election was a close race but generally transparent, peaceful, and technically sound.

While both parties seemed satisfied with the elections it was not without its complications. Diallo, the front runner, noted that his coalition was short on representatives to monitor the voting in some regions due to displaced supporters fleeing recent ethnic and political unrest. At least 2,800 people have been displaced since election proceedings began, however local officials of Diallo’s coalition claim the number is more likely between 15,000 and 20,000. The people who fled potential violence said they had been “threatened with death by the towns’ residents if they did not leave before the election.” Although Guinea has not seen significant politically motivated violence yet, the threat of an outbreak is sincere. However, many are optimistic of a peaceful transfer of power. The end result will depend on how the candidates decide to mobilize their supporters after the results of the election are announced.

Despite the threat of violence, Guinea’s successful execution of last Sunday’s election is a constructive democratic development for the country and the region. It has set the stage for future elections and the democratic notion that “those who govern are accountable to those they govern” has entered the mind frame of the general public. If the transfer of power is peacefully executed it has the potential to provide political stability, allowing for greater foreign investment, international aid, and in turn, economic development.

1. What do you think is the best way to ensure the transfer of power in Guinea happens peacefully? Do you think the AU, UN or other international agencies should get involved? Or do you think this should be up to the Guineans?

2. Do you think the act of voting has democratic value in itself? Does it change the way people thing about government? Do you think the influence is the same if the election results are not (or perceived not to be) accepted by the leadership?

3. Do you believe democratic principles, human rights, civil rights, etc. are more or less important that stability? When is one more important than the other? Why?

An article from UN Dispatch: http://www.undispatch.com/analysis-guineas-presidential-election-part-1