Africa in the News: “Sudan vote ‘held up by donors'”

Sudan vote ‘held up by donors’ 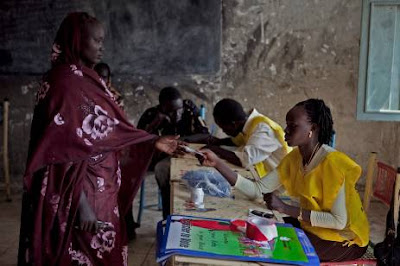 The south Sudan referendum commission has reached a major milestone towards the impending January referendum for southern succession. This week marks the beginning of registration for voters in the south. The registration is scheduled to take place between 15 November and 1 December and will operate from 3,000 sites across Sudan and in 8 additional countries (Australia, Canada, Egypt, Ethiopia, Kenya, Uganda, the United Kingdom and the United States).[i] United Nations (UN) and European Union (EU) panels have also arrived in Sudan to monitor the endeavor.

While the procedures of the vote are being carried out as planned and on time there has been some criticism from the commission towards international aid groups in reference to funding the referendum. While Sudan’s law requires that all funds be given to the commission which governs it many international groups are refusing to pay directly. For instance, the US Agency for International Development (USAID) has “budgeted up to $50 million to help stage the referendum” but will not release any funds directly to the commission. Rather, USAID and other agencies like it are offering assistance in the form of grants and foreign contractors. The chairman of the commission in Sudan, Mohamed Ibrahim Khalil, described the aid which has been offered as patronizing: “They give us finished goods, materials just as you cater for a minor. You don’t give a minor cash in case they should misuse it but give them finished goods and services which, incidentally, we resent.”[ii]

Beyond some funding disturbances there are still major issues to be settled before succession were to occur. These include the ever present issues of “border demarcation, issues of citizenship, [and] issues of how to share the oil wealth.” There is also a genuine threat of violence or all out war if the vote isn’t carried out transparently, efficiently, and appropriately. Despite concerns and complications, preparations for the vote have gone forward without major stalemate or violence. The advent of voter registration is encouraging and substantial progress to settle a bitter dispute in a peaceful and democratic manner.

1. Do you think aid agencies should give funds for the referendum directly to Sudan’s commission? What is the danger in this? What are the benefits?

2. How can international agencies ensure that the proper procedures are met in Sudan? Is funding the effort best? What about election observers? What is best to leave to the Sudanese?

3. Can you think of some complications of voter registration in Sudan? What might be more difficult about this than something similar in the United States? What might be easier?

An article from Voice of America, “Voter Registration Begins in Sudan”: http://www.voanews.com/english/news/Voter-Registration-Begins-for-Sudan-Referendum-108164694.html

A video from Maxims News Network on the voter registration in Sudan: http://www.youtube.com/watch?v=B4KpA4G5F3w

An article from the Sudan Tribune “Conflicting reports on readiness for voter registration in Jonglei state”: