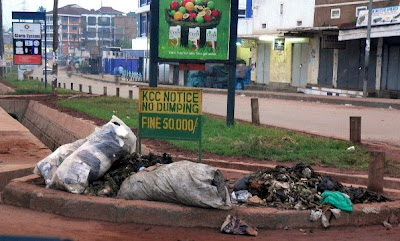 Two Ugandan entrepreneurs, Fred Kyagulanyi and James Sendikwanawa, found opportunity when others only saw a public hindrance. They were inspired by piles of rubbish in Kampala which they saw as a useful resource and an opportunity to profit. Today, the pair are successfully converting the trash into “’non-fossil fuel’ made from refuse such as plastic bottles, polythene bags and organic waste.” The fuel can be used in any diesel engine and is regularly bought by taxi drivers and locals for around $1 a liter, nearly half of what gas stations charge.

Kyagulanyi and Sendikwanawa found their technical knowledge in German literature on biodiesel and, despite a bumpy road, used trial and error to figure how to transform the waste around them into fuel. The pair did not only succeed but now offer their customers “super,” “premium” and “pure” grades. Customers confirm that the fuel works well in their vehicles and saves them money. One purchaser estimates that he has “been saving about 2,000 shillings per day [about 90 cents] compared to the past." They are now processing up to 2 tons of trash a day, have established their business and are planning to expand their capabilities.

The project is not only an advantage to Kyagulanyi and Sendikwanawa but for their community as well. Waste engineers in Kampala have calculated that “the city generates an estimated 1,500 tonnes of garbage a day, three-quarters of which rots uncollected on the streets, or gets thrown into in sewerage outlets and water channels.” The pair admit that they not only began this project to make money but also to “be part of the solution to the global demand for environmentally beneficial practice.” They hope to eventually expand their capabilities enough to clear every piece of waste from the city and turn it into something useful.

A UN paper on “Small Scale Production and Use of Liquid Bio-Fuels in Sub-Saharan Africa”: http://www.un.org/esa/sustdev/csd/csd15/documents/csd15_bp2.pdf

A Video on Electrical Energy from Waste in Durban, South Africa: http://www.youtube.com/watch?v=KIsio3gc6Jk

A Video on recycling ‘e-waste’ in South Africa: http://www.mnn.com/eco-biz/money-green-jobs/videos/assignment-earth-e-waste-creates-jobs

1. Why do you believe these entrepreneurs were successful? What can we learn from their success?

2. Do you think international intervention in this type of endeavor would have helped or hampered this project?

3. What are the benefits to local business versus those that are created or heavily supported by non-profit, aid or government organizations? What are the difficulties?