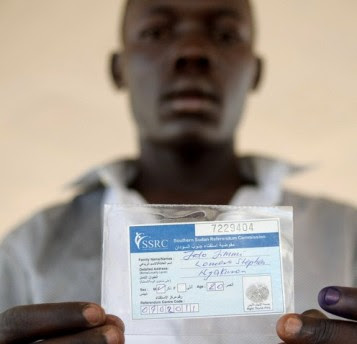 The registration process for the referendum on Southern Sudan’s independence ended earlier this week without major incident or accusations of fraud. The process began on November 15 for what was an initially scheduled two week period but was continued for an additional week following “high demand in the south and also to encourage a bigger turnout by southerners living in northern Sudan.” The initial estimates from the South Sudan Referendum Commission (SSRC) were that more than 3 million people were registered in the South and 76,000 in the north. These numbers represent a high, but not inclusive, representation of the 5 million eligible southern Sudanese living in the region, in the north or abroad.

Current reports suggest that the registration process was carried out fairly and freely with surprisingly few complaints from either party. The results of the registration match commission estimates confirming little, if any, fraud. However, there were low levels of registration in both the northern region of Sudan and abroad – while southern Sudan registered voters at a rate of about 60 percent, the north and the diaspora registered only about 40-50 percent. Mohamed Ibrahim Khalil, SSRC Chief, commented that “if all of the registered voters go to the polls on January 9 then ‘the turnout would not be bad and could be considered as representing the view of south Sudan.’"

While it is encouraging that this step of the referendum has ended peacefully, democratically and without widespread intimidation, many still hold reservations on the same outcome for the vote in January. In particular, for those southerners living in the north of Sudan there are security, safety and fraud concerns. The southern government has encouraged those residing in the north to travel to the south in order to cast their ballot to ensure that it is counted fairly and reduce security concerns.

An article on the registration from the Sudan Tribune: http://www.sudantribune.com/Voter-registration-for-South-Sudan,37212

A piece on Enough’s blog on the registration: http://www.enoughproject.org/blogs/registration-south-sudan-referendum-finally-underway

An article from UN Dispatch, “Scenes From Voter Registration in South Sudan”:http://www.undispatch.com/scenes-from-voter-registration-in-south-sudan

A short Al Jazeera video on the registration, “Deciding the fate of Sudan”: http://www.youtube.com/watch?v=NtKhFtC8LNg

1. Why do you think a higher percentage of eligible voters registered in southern Sudan than in the north or abroad?

2. Whose interest is most at stake in this referendum? Do you believe the north will be more negatively affected than the south will be positively affected? Will it affect the diaspora?

3. Are you surprised that the registration was successful? Do you think this is an indicator for the vote?

4. What challenges did the South Sudan Referendum Commission have to overcome in order to carry out the registration?

5. Do you think you would register and vote in a referendum even if you felt you might be putting yourself in danger by doing so? Do you think this is a major concern for southern Sudanese people (especially those living in the north)?