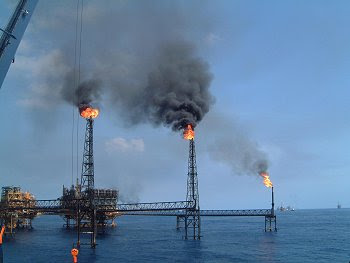 Ghana has officially begun to pump oil from vast underwater reservoirs found off the country’s shores three years ago. It was found in the ‘Jubilee Field’ and is “estimated to hold 1.5billion barrels of oil.” Another nearby field was discovered this year with an estimated additional 1.4 billion barrels significantly adding to potential revenues and the prospects of a new booming industry. A UK based oil production company, Tullow Oil, is now producing 55,000 barrels every day. The oil’s discovery and production will certainly have a large impact on the African country as revenues are expected to eventually reach $1 billion yearly. Although, some reports are skeptical of the benefits the oil will bring to Ghanaians. In other developing countries of the region, such as Nigeria, the cash flow from oil production has done more to fuel conflict rather than aide development. Indeed there is some concern about the lack of legislation and formal procedure to manage the new industry.

However, Ghana is notably different from countries in the region which have had less than favorable results of oil revenues. Stephen Hayes, head of the Corporate Council on Africa notes that Ghana has a “fairly transparent society compared to other countries dealing in oil – so they’ve got a better opportunity to get it right.” The country also has developed a strong civil society with activists organized and ready to monitor pending oil legislation in regardless to the environment, civil rights and development. Hayes also points out that Ghana’s economy is diversified, with “oil revenues expected only represents 6% of their economy – compare that to Nigeria where oil revenue represents 92% of the economy or Angola where it’s almost 100%.” This allows Ghana to manage the revenue without stalling the economy. This is not to say that oil will not have a large and positive impact on the economy as it is expected to increase the country’s growth by an additional 7 percent in the next year.

A video from Al Jazeera: http://www.youtube.com/watch?v=ncQexNRPvUc

A website dedicated to information and news oil in Ghana: http://www.ghanaoilinfo.com/

An article from National Geographic: http://news.nationalgeographic.com/news/energy/2010/12/1012115-oil-ghana-environment-jubilee/

1. Do you think Ghana will be able to uphold its promise to spread the wealth among the people and not in only a few hands? What challenges may the government/activists face in working towards this goal?

2. Should a country’s natural resources be shared by the people or given to those who discover it? What do you think has been done in most cases? Is it fair? How can we determine this?